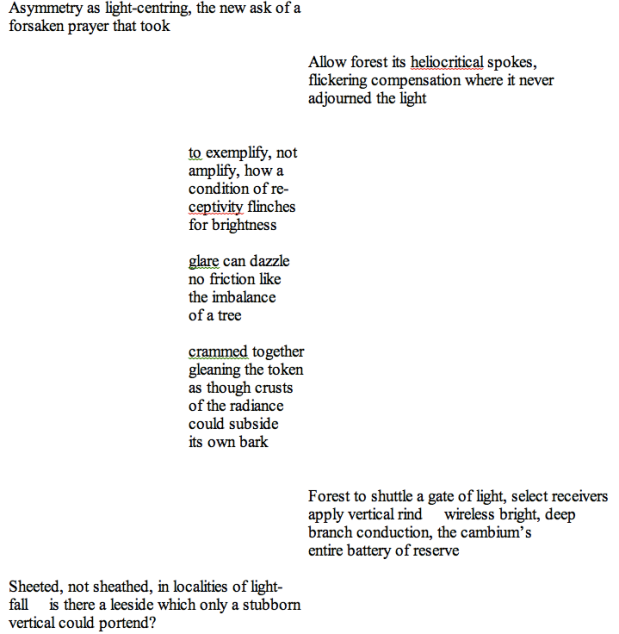 Peter Larkin’s poetry explores the idea of scarcity in its phenomenological aspects. Previous collections include Lessways Least Scarce Among (2012), and Give Forest Its Next Portent (2014). He contributed to The Ground Aslant: an Anthology of Radical Landscape Poetry, ed. Harriet Tarlo (2011). City Trappings (Housing Heath or Wood) was published in 2016 and Introgression Latewood is due out later this year.

A Pebble for my Father

New Year’s Day, and I’d forgotten
to bring my own pebble to a sandy beach.
In the car park, the road twisting round
the bulge of a Victorian pavilion,
I’d have dug up the tarmac to get one,
dug out grit from under car tyres.
Rain daubed lightly on the ground
was no good at all, it would have crumpled
into my hands when I tried to throw it.

I didn’t expect that one perfect pebble
on the ground. Casual as a shoplifter
I bent and put it in my pocket.
Then the wind and my feet were sagging
into the lugubrious sand. Whether it’s
hello or goodbye again, I never quite know.
But what I will say is, that by the sea edge,
wet as if they had swum out of God’s hand,
A hundred thousand pebbles were thrown back.

Carolyn Oulton‘s poetry has been published in magazines including Orbis, The Frogmore Papers, iota, Seventh Quarry, Ariadne’s Thread, Envoi, New Walk, Upstreet, Acumen and Ink, Sweat and Tears. Her most recent collection Accidental Fruit is published by Worple Press. Her website is at carolynoulton.co.uk

Shadow Bobbing
See how time moves bones
then buries them
how thought is apple –hard
wormy
Let those cider tears
release us
may we never down hearts
with a petty crunch
Let life peel us
the sad, everyday air
brown us
to the core
Michelle Diaz is a poet who currently lives in the colourful town of Glastonbury. She enjoys playing games with her ten year old son who suffers from Tourettes Syndrome and reading poetry like her life depended on it. She has been published by Prole, Amaryllis and was included in the Please Hear What I Am Not Saying anthology. Last year she was awarded 3rd place in the Mere Poetry Competition.

The sun’s full disc lifts clear of hills,
whitens, and chases purple shadows
from the land.   He was up before it,
has recited thirty psalms and bared
his conscience in the face of God.

A lizard living in a cleft beside
the cave’s dry mouth – his closest neighbour –
moves into sunlight, patient for
warming of its blood. The hermit, moistening
his tongue with brackish water, breaks
his fast – with one dry biscuit and
three dates kept by from yesterday.

Soon pilgrims and the penitents
will come. They camp at the oasis,
out of sound and sight, now pick
their way across the warming sand.
Many have come bare-foot. Each waits
their turn to tell the saint of cheap
adulteries and tedious deceits,
complain about unfaithful husbands,
shiftless sons. Many ask counsel;
few will follow what is given.

Some gawp into his cell, devoid
of all possessions. Only a water jar,
a codex of the scriptures, occupy
the space.   They will not guess he holds
sometimes, a dozen rounded pebbles,
a palm-fibre ball, inside the folds
of his rough threadbare robe.

After the final visitor recedes
across the hill and he has said
the vesper office, final psalms,
he may take up these trifles and
beguile the last light, concentrated
on some game that he had played
from childhood, letting the demands
of daytime fall away, the demons
of the night all stand aside and kick
their heels, excluded from the circle,
from the charmed arena of his play.

Tony Lucas lives in London, south of the river.  Stride published some of his early work, and he was a regular contributor to Ambit for a good number of years, among other magazines.  His latest collection, Unsettled Accounts, was published by Stairwell Books, two years ago.

The concept of right and wrong

An ethical foundation
can be a wonderful thing,
but it separates you from
other people, with
a barbed wire fence.

The concept of right and wrong
Is outmoded, and pilloried,
left, right, and centre.
Like grammar, and the Oxford comma,
it makes no sense to so many.
A look of something like pity
transpires; a clouded look, silence,
and a shoulder shrug.

When you say that ‘it’s the right thing to do’;
show compassion, or believe in the best
of humanity, heckles arise. Suddenly
you are persona non grata, and you may
as well have spat on their shoe, vomited,
or poisoned their food.

It seems like goodness
has no place; its image is tarnished.
And my belief slips further and further away.
Like fractions of shell; floating,
in a bowl of cracked egg.

Claire Sexton is a Welsh poet and writer living and working in London. She loves poetry, fruit tea and cats, and has been published in Ink, Sweat and Tears, Peeking Cat Poetry, Amaryllis, Word Life – Now Then Magazine, and Light – journal of photography and poetry.

Once I worshipped Paris
from the top of Sacré-Coeur,
spent my last genuflect-moment
at the tattered train
of Notre Dame, bathing
in biblical light. In the crypts
of St. Paul, I wept.
I am called to the word cathedral,
where the mother city lives—
come into her body,
the gentle rocking womb of her,
curl up on a pew, whisper
what you want. Call it sanctuary.
Do you need to be forgiven
or found? Will it be faith
or fortitude in the end? Is this really
only a wicked reward system?
Then why return? She responds
to your sadness with architecture.

In her hands, the scaffolding &
centering frames. She smiles and says
lift each stone now. This could
take centuries. And yet they were
cut to fit together perfectly. You
know this. The weight you can bear,
the entire roof on your shoulders.
It’s as simple as constructing an arch.
Watch as she tears down
what lies beneath you.

Jen Rouse’s poems have appeared in Poetry, Poet Lore, Pretty Owl, The Tishman Review, The Inflectionist Review, Midwestern Gothic, Sinister Wisdom, and elsewhere. She has work forthcoming in Up the Staircase, the CDC Poetry Project, Parentheses, and Sliver of Stone. Rouse’s chapbook, Acid and Tender, was published in 2016 by Headmistress Press. Find her at jen-rouse.com and on Twitter @jrouse.

I walk the empty aisles and sit
along a row of empty seats.
The faded fresco above me
seems to invite a form of words.

And words seem to be everywhere –
from stone columns to wooden beams,
from the altar to the lectern –
they fill the air in words once said.

In the corners of the roof tops
some prayers lie between the cracks
and from the Stations of the Cross
they discolour the old varnish.

Arches of stone support the words
that have been uttered in deep faith
and all of the stained glass windows
have prevented them escaping.

Millions of words like far-off stars
light up the darkness of the night.
They formed just like stars and burst
out in hope of a better world.

And right now they shower the floor –
supplications and confessions
and petitions of every kind –
then rise like invisible dust.

Jim Aitken is a poet and dramatist living in Edinburgh where he also tutors in Scottish Cultural Studies. His last collection of poems was called Flutterings, published by Red Rose Press in 2016 and his last play was Muriel of Leith, produced by Spartaki for the Leith Festival in 2017. Jim also tutors in Creative Writing and takes groups on Literary Walks around Edinburgh.

No one said
Enlightenment
would mean
this your joy
unbearable
to those you
bear. “Thank you
thank you” they
weep as they
back away changing
next to nothing
grateful for your
being right there
way over there
but locking
the temple doors
from the outside
a switch to flick

how dark is
this enlightening.

Wayne-Daniel Berard teaches English and Humanities at Nichols College in Dudley, MA. Wayne-Daniel is a Peace Chaplain, an interfaith clergy person, and a member of B’nai Or of Boston. He has published widely in both poetry and prose, and is the co-founding editor of Soul-Lit, an online journal of spiritual poetry. His latest chapbook is Christine Day, Love Poems. He lives in Mansfield, MA with his wife, The Lovely Christine

In the wood is a moss-brushed stump
green like the mouth of a well.
From it one can see
bracken playing cat’s cradle
with the spider’s web
that is slowly pulling it down.
First there is a wooden sign post
to chase across a field
of scratchy colours. All this
must be negotiated first.

Of course before that is the hill
and the open door where the sun
fights shadow on the carpet.
The woman walking past,
her dog and a car swimming slowly
towards each other
through a puddle of heat,
have gone now. The bird in the hedgerow
goes on with the same three notes.
Our father. Our father. Art.

Carolyn Oulton‘s poetry has been published in magazines including Orbis, The Frogmore Papers, iota, Seventh Quarry, Ariadne’s Thread, Envoi, New Walk, Upstreet, Acumen and Ink, Sweat and Tears. Her most recent collection Accidental Fruit is published by Worple Press. Her website is at carolynoulton.co.uk

The Virgin of Pico Rivera with Child

I saw you in the rundown K-Mart on Cudahy. Guadalupe miracle teen mom like a cuttlefish, cuddling baby cephalopod wrapped in swaddling clothes or a quondam shroud. No polyester sweaters covered boneless arms. No lotion soothed dry suckers. No infant hoodies in the three dollar bin fit a gold-trimmed mantle.

Who cares for madonnas in palatine blue and horn-rimmed spectacles? What lips ever dared press your Aztec zipper mouth?

At the strip mall laundromat papa clutches his lapis cross and strokes his Fu Manchu. Your eyes wobble loose behind teardrops and riotous tentacles. Could Los Angeles infect with chastity? Could the Lamb enfold this broke-down town like a mother hen, riding his hydraulic Chevy, aglow in a Nautilus halo from Rosemead to Southgate?

And the six-armed shall inherit the Earth. And the eight-armed shall rise on a perfect spiral from Marina del Rey to enter the kingdom of Heaven.

Richard Manly Heiman lives on the west slope of the Sierra Nevada. He works as a substitute teacher, and writes when the kids are at recess. His work has been published by Rattle, Rust + Moth, Into the Void, Sonic Boom and elsewhere. Richard holds an MFA from Lindenwood University. He is a two-time Pushcart Prize nominee and his URL is www.poetrick.com