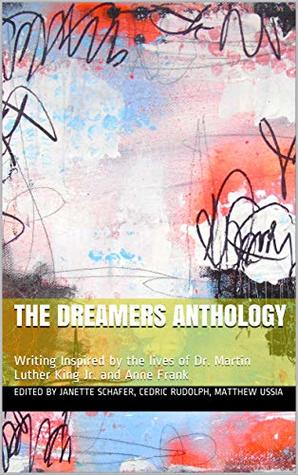 I was sent this anthology, of primarily but not exclusively poetry, over the course of last year and it’s a really strong one with a striking premise. Civil rights campaigner Dr Martin Luther King Jr and diarist Anne Frank were both born in 1929. The book, published last year, commemorates what would have been the 90th birthday of both. On finding this out, Janette Schafer comments in her introduction, ‘My first thought was, what would these two have to say to each other had they the opportunity to meet?’ Their ideas, their resilience, and their dreams meet and are celebrated here. Contributions are not bound specifically to explore the lives of either Luther King or Frank, although many do in ways that are poignant and lyrical. But all the pieces reflect in some ways on human talent and bravery in the face of persecution. Some have a confessional tone or are memoirs in miniature, others are more objective and innovatively written.

The anthology is structured, quite loosely, into five sections, each acknowledging notable dates for either Frank or Luther King – the first, ‘Voices’, June 14th 1942, for example, is the date Anne Frank begins her diary. ‘Darkness’, is prefaced by April 15th, 1945, the date British troops liberate Bergen-Belsen concentration camp. Its stated theme is, again, treated both specifically and more tangentially. The horror of the Holocaust is something that (as Matthew Ussia notes in ‘The Morning after Antwon Rose was Murdered by a White Police Officer’) the philosopher Adorno suggested should put an end to poetry. But here are many unflinching examples of the difficult poetry of imagined witness and of elegy. Resonant detail and thoughtful phrasing are the keys to several powerful pieces, such as ‘fetters of silence’ in Nina Pick’s ‘Photo of the Deportation’.

Subsequent sections, ‘Resistance’, ‘Liberation’ and ‘Legacy’ broaden the anthology’s themes and tone. Imprisonment takes many forms – repression is an intersectional experience and can be political and gendered as well as racially oppressive – and the poems acknowledge this in their variety (Wendy Paff’s ‘Deep Creek MD in the Era of Trump’; Arlene Gay Levine’s ‘I am a Woman’). While there are striking threads right through the anthology which trace the lives, deaths and legacies of the two titular figures (for example the adjacent ‘Flight’ by Carrie Albert, and ‘Independence Day’ by Matt Kohut), many other voices and dramatic fragments are evoked by the end, a rising chorus of voices, in fact, demanding poetic respect as well as some serious soul-searching on the part of the reader. Some present contemporary injustices as a clear echo of past atrocities, such as ‘”Nation of Immigrants” Removed from Mission Statement’ by Daniella Buccilli, a hard-hitting poem which opens with: ‘Expired paperwork is a violation beyond redemption in times of nationalism.’

Just in terms of skill and craft, this anthology has an impressive poetic reach. I particularly liked Devon Balwit’s ‘Abcedarian’ poems – the first starts:

Antennae – not horns – are what Jews have, the
better to test the prevailing winds, for the
careless, the cocksure, go down. it
doesn’t matter the century, the decade. …

‘Your tongue twisted and your speech stammering as you seek to explain to your daughter why, see ominous clouds of inferiority form in her mental sky./ Concoct an answer for a son who is asking: “why do white people treat colored people so mean?”‘

It was also good to see some longer poems in here, such as Maureen Doallas’s ‘Anne’; a multi-page poem, intercalating some of Frank’s own writing, that gives its subject room to breathe. Here’s the start:

Goodness happens
even when it does not.

A diary begins on the day
it is written and everything
goes so fast.

The breakfast dishes are left on the table
and a cat gets the only goodbye.

To be 13 when the world is
on fire and it is pouring rain
and your sister, 16, is summoned means

We shall disappear of our own
accord and not wait until they come
and fetch us.

There are also some beautifully pared-down poems, such as Schafer’s own ‘Things that are not Dogs’ and Amanda Woomer’s ‘the holiest’. Woomer’s poem makes explicit what is implicit throughout the anthology; namely that all human life is valuable and sacred, intrinsically worthy of respect and remembrance: ‘we live/ we love/ we die/ the holiest’, a sentiment echoed in the letter-poem by Karen Poppy that concludes the book: ‘she [Frank] would have noted…the miracle of each of our lives, that we exist at all…’

I don’t want to neglect the prose in this anthology however. There is a fiercely thought-provoking essay by Mark Blickley on the ‘recruitment’ ethos of Arlington Cemetery (described as ‘the theme-park brainchild of the Pentagon’), and a great one-woman playscript celebrating American lawyer and social activist Bella Abzug, ‘Playing House’ by Coni Ciongoli Koepfinger.

Creative writing necessarily involves a certain amount of imaginative vision, of dreaming. Martin Luther King’s famous speech is of course predicated on his dream of social justice. This anthology honours our present day dreamers as well as those so important in the past, but it is not willing to accept that freedom and justice are only ‘a dream deferred’ (to use Langston Hughes’ phrase); the pieces here challenge privilege, and call out the slowness to change of those who have the most privilege. Not least, this anthology is a call to action. Racial hate crime and antisemitism are both still shockingly present in the world, and must be decried and defeated by both words and deeds. Reading The Dreamers Anthology is an inspiring place to start.