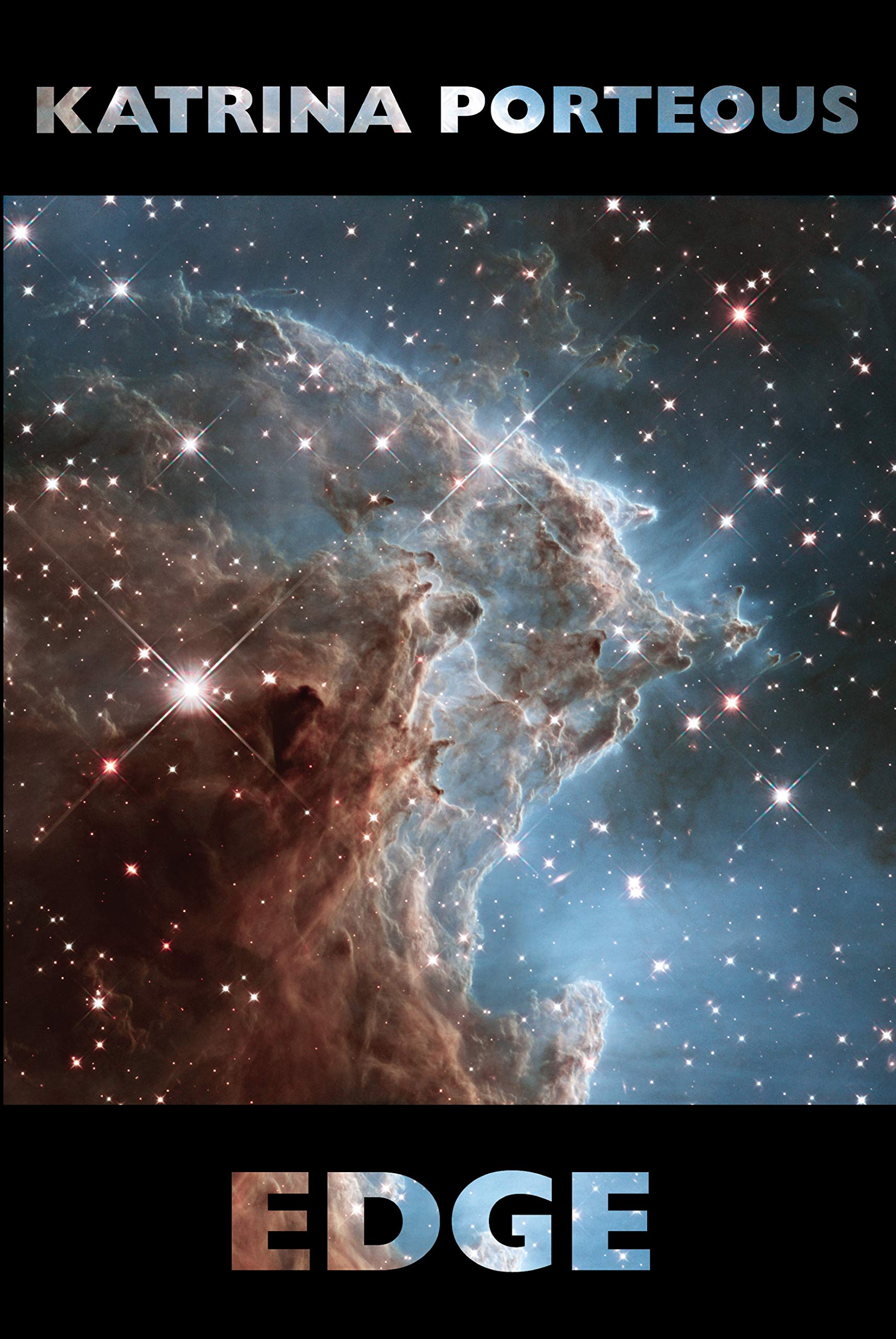 Katrina Porteous is a poet based in Northumberland, England, who focuses ‘on the theme of ‘nature’ in its widest sense, and ‘place’ in its deepest.’ This has led her to consider some of the profound questions that have concerned philosophers, religious thinkers, scientists and writers for millennia: What is the nature of matter? What is reality? How did the Universe come into existence? What is ‘out there’, beyond the confines of our planet Earth?

In Edge, her third collection with Bloodaxe, Porteous explores themes from contemporary physics and astronomy using the poet’s lens of imagery and metaphor. The collection is divided into three extended sequences that have their origins in performance pieces she created with the composer Peter Zinovieff for the Life Science Centre Planetarium in Newcastle. However, as Porteous makes clear in her Introduction, these are not so much poems about science as about ‘the poetry of science…. a search for alternative narratives to replace old theologies’. No scientific knowledge is required in order to read them and indeed Porteous herself does not have a scientific background, although she has clearly carried out meticulous research into her subject matter. The collection also addresses themes that are perhaps more familiar in poetry: perspective and perception, translation, the limitations of language as well as its capacity for revelation.

Field, the first sequence in the book, is an imaginative interpretation of quantum field theory. Wisely, Porteous makes no attempt in her poetry to explain the concepts involved (the interested reader is, however, provided with copious notes at the back of the book) and she avoids using terminology that would be unfamiliar to a general reader. Instead, she seeks to express the theory’s essence, its dualities and uncertainties, its symmetries and mysteries, as well as the sense of wonder that it invokes. The sequence opens with a statement of the great unresolved conundrum of modern physics: the incompatibility between the large-scale theory of general relativity and the theory of quantum mechanics, which applies on a sub-atomic scale:

The pared use of language and spacious layout suggest the precise, formal elegance of the field equations. But how to express in poetry the depth, complexity and profound ramifications that these equations signify? Porteous turns to metaphor, seeing in the behaviour of elementary particles a wilful playfulness analogous to that of mythological characters such as the inhabitants of Ovid’s Metamorphoses:

‘The Ancients were right. It is all
Coupling
And disguises,

Feverishly swapping bodies
When no one is looking.’

The second sequence, Sun, takes as its subject the star at the centre of our solar system, its structure, dynamical processes and the scientific methods used to glean information about its interior. Sun begins with a question – ‘Darkness said to the Sun/ Who are you?’ – and subsequent poems in the sequence pursue this theme of inquiry through a succession of dazzlingly inventive images. ‘Who is bouncing pebbles on the Sun’s slow drum?’, the poet asks in ‘Sunquake’. Sunspots are seen as ‘dark wounds’, while the fluctuating features of the solar surface are likened to ‘pockmarked orange-peel granulations’ and ‘whirlpools flowering and fading’. Interpreting the sun’s characteristics is as challenging as trying to decipher an unknown and mysterious language:

‘Body and Not Body. One figure of speech
Wrapped in another. Deep
Disagreement in its grammar.’

Edge, the final sequence, is a poetic voyage around four of the moons in our Solar System: Io, Enceladus, Titan and our own Moon. The opening chant has echoes of a Greek chorus and powerful, tidal rhythms:

The connection with ancient Greece continues as each moon is assigned one of the four fundamental elements (earth, water, fire, air) that were postulated by Empedocles in the 5th century BCE – an elegant tribute to the origins of western scientific inquiry.

Our insights into these moons are derived from interplanetary missions such as Apollo, Cassini and Galileo, ‘Carrying our human hunger/ Into the perpetual silence’. Just as these missions push the boundaries of our scientific knowledge, so Porteous pushes the boundaries of language, generating extraordinary sonic effects. Of small, icy Enceladus she writes:

Our own Moon is ‘Nothing’s mirror’/ Stripped of sound, leeched of colour’, bearing ‘fossil footprints’ from last century’s lunar landings.

After such bleakly desolate moonscapes it is a relief to return to the familiarity of Earth. The collection ends with a Coda of three poems, set respectively in Cambridge, Durham and Northumberland. They are infused with spiritual sensibility, contemplating from a very human, location-specific perspective ‘the mysteries of origin’ and the cyclical nature of growth, death and regeneration. The concluding poem, with its deliberate emphasis on the first person pronoun – ‘I walked out to the end of the Broad Rock’ –  is at once a subtle reminder of our place in the vastness of the cosmos and an affirmation of humanity’s ongoing quest to explore the edge of knowledge and push ever further the boundaries of our understanding.

Marian Christie is an applied mathematician and poet. She blogs at www.marianchristiepoetry.net.